So, is it possible to overdose on incredible landscapes? If anyone's going to find out, it's me, because yesterday's drive was another jaw dropping journey. 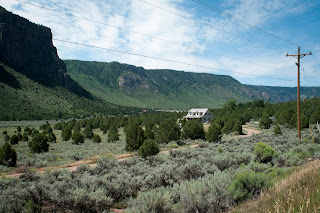 This time I followed the Unaweep-Tabeguache Scenic Byway, otherwise known as Colorado Highway 141. The first stretch was through the stunning Unaweep canyon.

If there's one unexpected side effect of this trip, it's an increasing interest in geography and geology. Why do these canyons exist? What makes them so impressive? The Unaweep has everyone confused, because water flows out of both ends (and only a dribble at that), so what carved it? The popular theory is that Colorado river used to take this route, but got diverted millennia ago.

So what does this mean for the driver like me? It means a wide canyon with massive cliffs, and a central floor about half a kilometer wide that's a lush green pastureland. It's dotted with little farms and drop dead gorgeous holiday homes - the best of which was at the end of canyon.

Here is the home of John Hendricks - founder of the Discovery Channel, and now for sale for $149 million. All 6,000 acres of it, includes its own airport, a 22,000sq ft 14 bedroom house,  and an observatory(!). I didn't get to see the house, but I did see the nextdoor Gateway Canyons Resort - also owned by John Hendricks. This is a top luxury resort for the ultra rich who need privacy on their holidays - so what am I doing there?

Well, this is where John also keeps his car collection. All I knew when I set off was that was a car museum out in the middle of nowhere, and I was expecting a dusty barn with a few Model-T Fords. Oh no. John believes that some cars are works of art and should be preserved as such.

This shining showroom contained some of the most polished and over-preserved cars I have ever seen. These cars can't have looked this beautiful on the day they were sold. Before I went in, I had to a watch a video that told us to not even put a finger on these cars. The acid in your sweat might cause corrosion. You can bet he never drives these cars!

The cars were impressive, no doubt, and one gold Oldsmobile cost him $3.4 million recently at auction. But it left me a little cold - they're American cars, so they didn't mean much to me, and it was a bit sad to think no one would ever drive them. But all to their own.

From Gateway, the road follows the Dolores River Canyon - but unlike other canyon drives, not at the river level. No, this time the road has been cut into the canyon cliffs about halfway up. It made for beautiful views on those few moments I plucked up the courage to look away from the road! 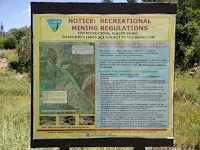 I then turned to follow the San Miguel river - where a large sign detailed where you were (and weren't) allowed to pan for gold! I had no idea this was still a thing, but local friends said yes it was. In fact, they actually found some traces of gold when they did it. I'm off to Walmart to buy a sieve and head back.

Finally, I crossed the Uncompahgre Plateau, stopping at the tiny little town of Norwood for a coffee and a walk around to stretch my legs. 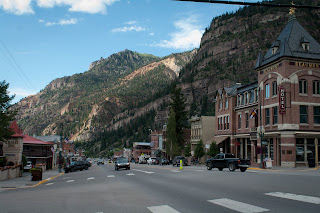 After another vertiginous drive off the plateau, it was up into the Colorado mountains proper. I'm now up at 8,000 feet in the resort town of Ouray. In winter it's a ski-resort, it summer it's another hub (like Moab) for hiking and off-road adventures. It's nestled right into the mountains, looking like a cross between a Swiss resort and a Wild West town. I rather like it.

Right, off to the test out the brewery I spotted on the way in! 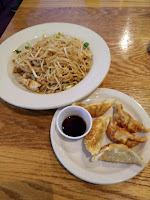 It's a tricky one - there was nothing wrong with the dinner, per se, it just wasn't what I wanted. I wanted something clean and bright and simple after too many days of diner food. But this pad thai was gloopy and stodgy and oh my gosh, so, so sweet. Really not what I was looking for.