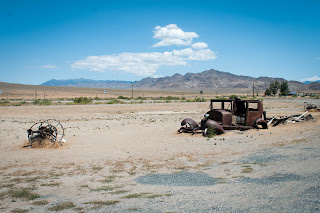 So I'm now two-thirds of the way down US-50 - often called 'The Loneliest Road'. I can see why - I've driven 309 miles and passed only two one-horse towns on my way here. There's been almost no sign of my fellow human except the occasional car blasting past in the opposite direction.

I've been describing this as a drive across the desert, but it's not really. According to Wikipedia it's an ecoregion of the temperate coniferous forests biome. And an area of contiguous endorheic watersheds. I'm starting to wish I hadn't asked. But what it's not is a wind blown sandy desert, or a wasteland with cactus plants.

What it is, is plateaus punctuated by mountain ridges. So I'll drive across these undulating plains, covered in sagebrush, on dead straight, arrow like roads. Then they'll wind their way up from 4,000 to 7,500 feet, cross a pass, give you a breathtaking view of the next plateau, and drop down again.

Sometimes I would stop - to read a historical marker, or see the remains of a Pony Express station - and the warm air would be sweet with the smell of sagebrush. This green grey plant is the state flower of Nevada and has a beautiful scent, like a cross between sage, rosemary and mint, that fills the air.

So was the road lonely? No. There were times when I couldn't see a car to either horizon. But you knew that if you were going to meet another vehicle, it would be a lumbering RV dragging its baby car behind it, crawling at 25 mph through the passes. I was also astonished to see the occasional cyclist. You'd have to brave, mad or both to consider this as a sensible cycle ride. 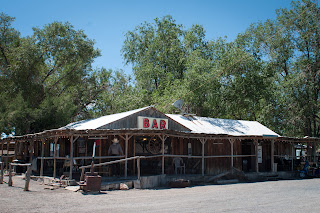 Was there nothing to see? Well, not exactly. The area has plenty of history - there are Indian petroglyphs dating back 7,000 years for example.

The route itself follows that of the Pony Express and the trans-continental stage coaches. Dotted along the road are ruins - surrounded by Fort Knox style barbed wire fences - of the old stages and stations. I understand the desire to preserve these buildings, but the security was a little off putting. 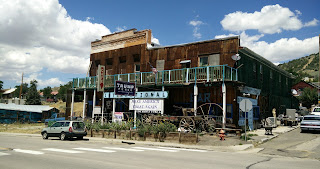 There's also the occasional outpost or even town. Middlegate was a wooden shack with a bar dating back to the 1800s.

Austin (population 192) provided me with a much needed coffee and muffin. I also a chance to look at 'Stokes Castle'. A crumbling three story structure built in 1897, used once as a summer home by a mining magnate and left to tumble down ever since. 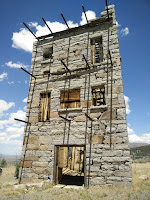 The drive up to see it was terrifying, but the view was incredible. Eureka - a common place name in this mining district - might have a population of 600, but the opera house, built in grander times, is still open. 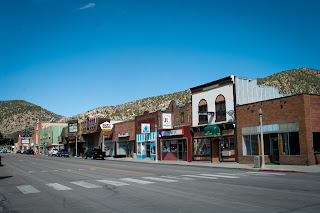 And from there, into Ely. A population of 4,000 makes it the largest metropolis for hundreds of miles. It has three casinos and the 'Hotel Nevada and Gambling Hall' - which boasts Ingrid Bergman, Gary Cooper, Lyndon B. Johnson and Mickey Rooney among its former guests. Although looking at it, I suggest those days are over.

I stayed at the 'All Aboard Inn', by Ely's train station. I didn't realise until the morning this was still in use - when a steam whistle from their tourist steam train work me up.

So I survived the first section of the Loneliest Road. What will tomorrow bring? 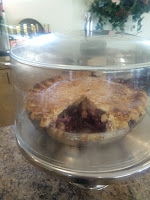 I can't believe this was my first pancakes of my roadtrip. I stopped here before journeying out across the Loneliest Road, US-50. I had pancake, sausage and eggs, and it was spot on. There was an awesome looking cherry cake winking at me across the counter. I didn't have room for a slice, but I will say all their pies and cakes looked delicious. 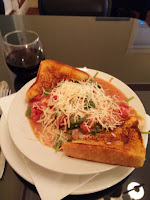 I can review this place from both angles - having been a guest and eating in the restaurant. The hotel is lovely - a few spacious, nicely decorated rooms, and good wifi too! (a problem recently!). Worth noting it's not in the centre of Ely, great if you're here for the railroad museum, or just passing through like I was. Less handy if you want to sample the 'nightlife' and the casinos.

Dinner was fine - I had the ravioli - tasty, filling. Not haute cuisine, but what do you expect from this little town in the middle of nowhere? Breakfast, they were on safer ground - classic diner style fare, set me up nicely for my days drive.
at July 29, 2017