Day One - Las Vegas to Stovepipe Wells via Shoshone and Badwater Basin - 180 Miles.


The day started calmly enough in Las Vegas (if Las Vegas is ever calm) when I went to pick up my hire car, a Jeep Renegade. The butch name and wide collection of gadgets (which is what sold it to me) hide the fact it's very much a sheep in wolf's clothing. Related to the new Fiat 500 SUV, it's got a tiny little engine that pulls so slowly I thought it broken at first. But, after 200 trouble free miles across the desert, we've actually bonded. I know to avoid hills and not overtake things.

So, when you're on your way to the hottest, driest place in the world, what do you not expect to be your first problem? That's right, rain! Yet the heavens opened as I left Vegas, and that was a problem. Death Valley is prone to flash floods and road washouts and sometimes closes when the weather is bad. All day I've been trying to outrun an ominous black storm (hard in a Jeep Renegade). 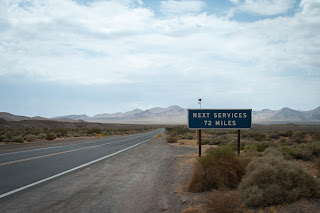 Lunch was in a little town called Shoshone. It was once a railway stop and now survives selling over priced petrol - and tasty burgers - to tourists arriving at the south entrance to the Valley.

When I arrived at Badwater Creek Road ('next services, 72 miles') my worst fears seemed to have come true. Two yellow triangles alongside the road claim 'flooding'. But they didn't say, 'flooding, road closed', so I drove on regardless. The emptiness is awe inspiring - Death Valley National Park is bigger than the state of Delaware, but has a population of near zero. It's obvious why. It's a wasteland, only the green-brown shrubs tell you this isn't the surface of Mars.

I don't know why it surprised that my drive to the USA's lowest point would involve a lot of downhill driving, but it did. The road wound down from 3,200ft to 300ft below sea level (the height of Mount Snowden, to put that in perspective). The valley floor was once the basin of a lake, and all that's left of that body of water are occasional salt flats. Each one gives the mirage like quality of looking like water from a distance. I can ony imagine the frustration of the first settlers passing through here, and why they named it as they did. 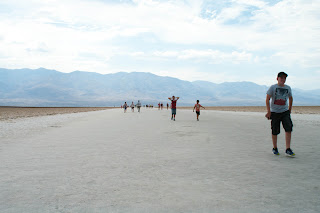 The largest of these salt flats is at Badwater Basin, the lowest place in the USA. And this is where I met tourists again. Badwater is a quick trip from the northern entrance to the park, so I was glad I took the extra time to come from the south. I got to experience it on my own for the first couple hours.

Badwater was full of French tourists - and a smattering of Germans. No sensible American would be here er, but many Europeans come, attracted to extremes we don't get at home. To be honest, it's why I was here too.

The heat is unbelievable. The oncoming storm meant a lot of cloud cover, which dropped the temperature to an unusually low 46C (115F). I couldn't imagine what it would have been like in the full force of the sun. What I didn't expect was the wind, strong enough to slam my car door and remove a finger. It tore the moisture out of you, making you gasp for breath. I couldn't imagine ever walking the valley on foot.

After Badwater, you start to get the 'sights' of Death Valley. Artist's Drive is a wonderful winding road that takes you into the canyons that border the lake bed. Full of mineral deposits, the hills are greens and reds and yellows. The road itself is a fantastic drive, single lane, swooping between narrow gorges and roller coasting through river beds like a theme park ride. 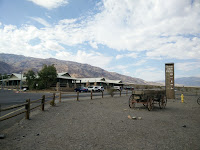 Next come the sand dunes outside Stovepipe Wells, where I'm staying for the night. Now the heat and searing wind combines with sand, whipping around, getting into every nook and cranny.  After a few arty photos, I escape to Stovepipe Wells Village and my welcome, air conditioned, room for the night. 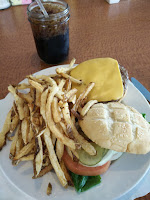 I'm always a bit nervous of places with a captive audience. The Crowbar is the last place to eat for some 80 miles across Death Valley, so it doesn't need to be good to get custom - yet it is! I kept it simple, just a cheeseburger and fries, but it was well executed, tasty, and served with a smile. Simple, classic diner food. 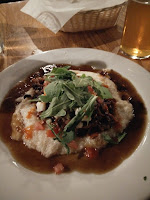 There's absolutely nothing wrong with Stovepipe Wells Village. The room was okay, the restaurant was 'meh' and that averages out to three stars. I was lucky enough to get a courtyard room, which meant I could access the business centre's wifi - a top tip for you if internet access is important. The restaurant was busy, as it's the only place to eat for miles (the saloon directs you to the restaurant if you want something to eat). Dinner was ... okay ... I had the pulled pork and grits. The bbq sauce was too thick and sweet for my tastes. But I'm sure, after a long day in the heat, hiking the trails, the food hits the spot just right.