This post comes from the impossibly photogenic Virginia City, up in the mountains of north Nevada ... so, how did I get here?

I left Bishop - after an enormous plate sized pastry at Erick Schat's Dutch Bakery - without expecting much from US-395. The aim of the day was to get north, so I could pick up the 'Loneliest Road', US-50. 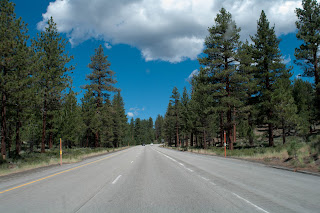 Yet again, California conspired to confound me. It threw me a continual, relentless display of the best of the American countryside. Views, vistas, landscapes, one after another.

US-395 might have looked flat on my map, but because it hugs the eastern side of the Sierra Nevada range, it's actually a set of plateaus, separated by ridges.

This gives the effect of a slow motion roller coaster, never knowing what will appear at the top of the next ridge. We'd climb and climb, sometimes as high as 8,000ft, then the next landscape would appear. Sometimes a pine forest, sometimes a shimmering lake, sometimes a bright green alpine meadows dotted with black cows. 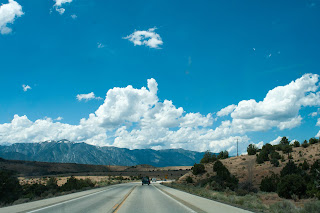 A combination of road resurfacing works and too many stops to take photos meant I aborted my plan to stop for lunch in Carson City. It was looking touch and go whether I'd get there before the recommended restaurant shut. Instead I pulled over in the little town of Walker, to try their eponymous burger shack. I would recommend you do the same if you're passing that way!

By this point, mother nature had tired of showing off and let the humans take over. I crossed the border into Nevada and the dusty suburbs of Carson City. The snow topped peaks of the Sierra Nevada receded into the distance as I climbed up into the yellow hills heading towards Virginia City. 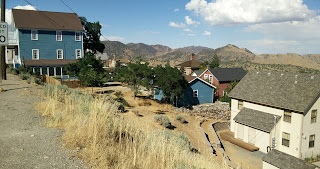 The steep, narrow road wound up to 6,500ft, presenting me with a Victorian era western town, all saloon doors and wooden boardwalks. Virginia City got rich from the Comstock lode - a huge seam of silver ore that once made the city richer than San Francisco. When the ore petered out, the miners left and the city remained preserved, tended by the 800 (of 25,000) remaining inhabitants.

It's a major tourist attraction now. The buildings may say 'hotel', 'fire station' or 'general store', but like Disneyland all the shops are the same within - each selling cowboy gear, salt taffy, armadillos-with-bottles, sepia photos of you and your family, Christmas decorations and Indian jewellery. Unlike Bishop, you couldn't live here - there's no deli, no stores, no book shops or suppliers of household goods. Unless you can live off taffy and beer of course ... 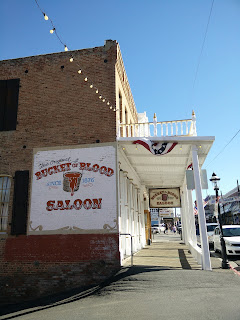 What it does have is lot of saloons - as I'm sure it did in 1875. It's how they made sure that much of the silver dug from the mines never left the town. I found one that brewed its own beer (I can sniff them out) and had an enjoyable drink while listening to babble of non-American accents around me.

After a enjoyable light and tasty Mexican meal, I yet again find myself preparing for the next day's drive. Another major stage of the trip is behind me - I've left California and the US-395 behind me. Now I have a five hour drive across almost nothing ahead of me, on the Loneliest Road, the emptiest, least populated road in America. I can't wait!

I hadn't planned to eat here, but I was running late for lunch in Carson City, and stopped here on an impulse - and so glad I did! This is a proper little burger shack, outdoor seating only. I had a bacon cheeseburger with crinkle cut fries, and I simply couldn't fault it. 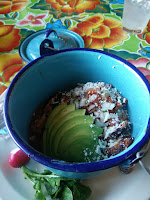 This place exactly hit the spot - after a week of road food, I wanted something clean, simple and tasty. This wasn't your stodgy, cheese covered Tex-mex, but much more authentic. Also, wonderful views out across the hills if you get a window seat like I did.