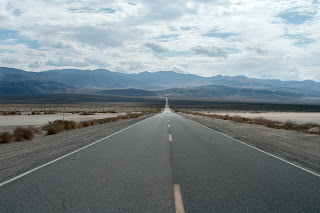 This was a day of highs and lows, as I travelled from the lowest point in the USA to almost the highest. It's also been a day of surprises. Some of the roads on my trip are iconic, such as Badwater Road in Death Valley or the upcoming Loneliest Road across Nevada.

I've been anticipating some of these for years. Some are blue lines connecting breakfast with lunch, ways of moving the trip forward, and I go into them with no expectations.

Today's drive to Lone Pine was supposed to be nothing more than an hour's drive to get brunch. It turned out to be one of the most exhilarating drives I've ever done. 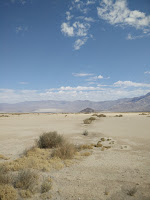 It started at sea level, with one last final, flat, empty stretch across Death Valley. It then climbed 5,000 feet up the Panamint Range to Townes Pass, then swooped down 3,000 feet into the Panamint Valley. The road was wide, with long curves and views that took your breath away. If I'd had someone to talk to in the car, I would have been speechless.

Like Death Valley, the floor of Panamint is desert, with the road cutting straight across, to the 'town' of Panamint Springs. Think caravan park and petrol stations. It was the only civilisation I would see before arriving at Lone Pine. From there, it was back up into the hills - but this time much tighter curves. Sheer drops one side, cliff faces the other, until I reached the plateau at the top, at 4,250 feet.

From here, I parked the car and took a walk out to Father Crowley Point - a chance to look back into the Panamint Valley and see where I'd come from. It was only 10am, and I'm higher than Ben Nevis, so the temperature was actually quite bearable. The mile walk to the outlook was definitely worth the effort. 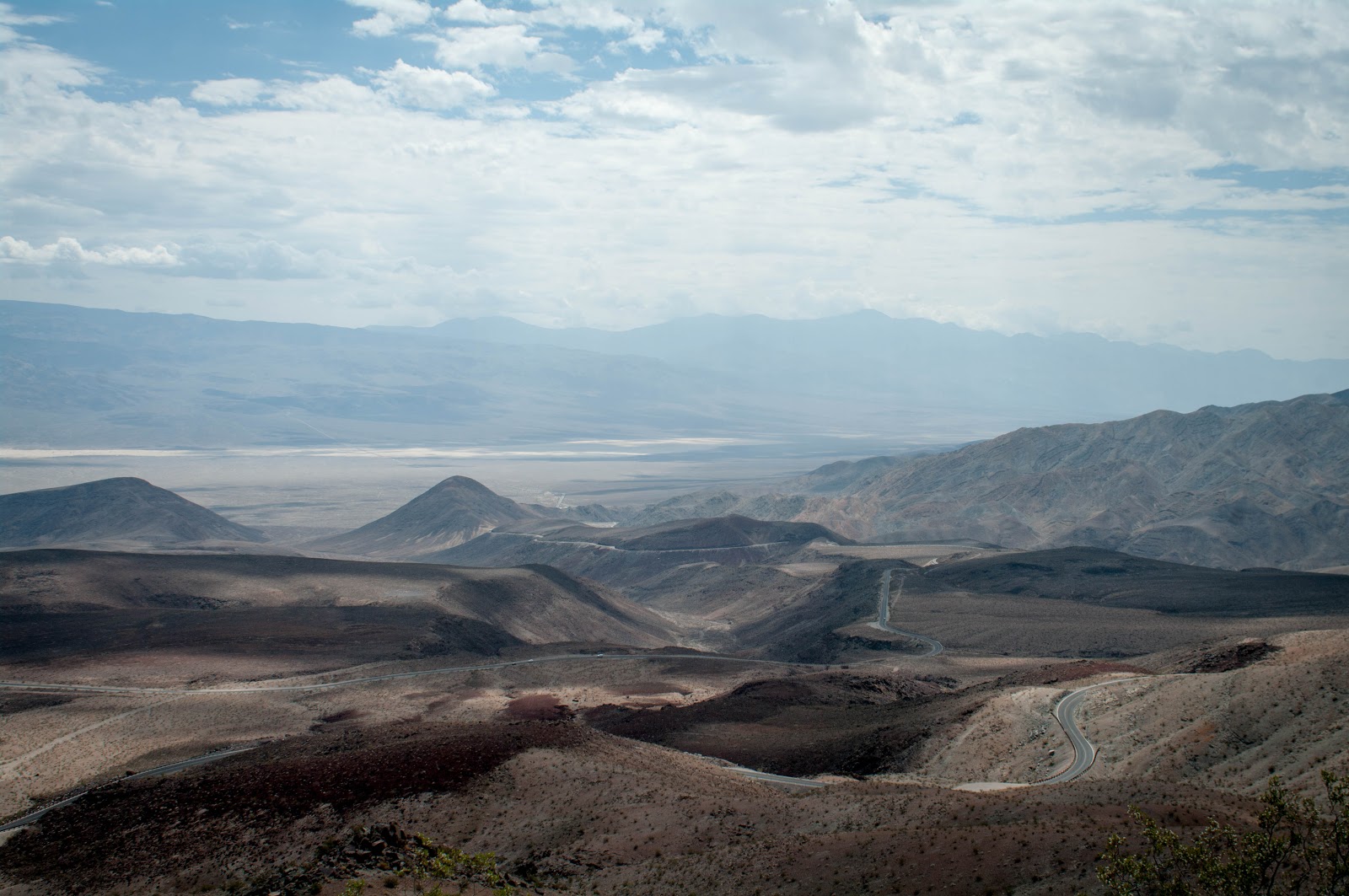 Up here I could see the entire valley, with the road only a scratch in the desert below. It was completely silent, the only distraction being an eagle swooping close above me, intrigued by this lone human.

From here it was a short trip to Lone Pine, at the base of Mount Whitney, the tallest mountain in the USA.

Lone Pine is famous as being the location of almost every single Hollywood Western. It's a short drive from Los Angeles - shorter than Texas or Wyoming - but has everything a filmmaker could need. Deserts, canyons, snow capped mountains.

Almost every B move western from the 1920s onwards was filmed here, plus any other TV show or movie that needed a rugged outdoors - the opening titles to The Lone Ranger, the town terrorised by man eating worms in Tremors (one of my favourite films), the canyon scenes from the original Star Wars ... thousands and thousands of films. And I learned all this at the wonderful Museum of Western Film in Lone Pine!

After Lone Pine, it was a less dramatic drive to Bishop, where I would spend the night. I'm on the US-395, driving through the heart of the 'other California' as it's known here. It's the thin strip on the east side of the Sierra Nevada mountains, a long long way from the sprawl of Los Angeles. On my left are snow capped mountains, on my right, the older hills that lead back to Death Valley. 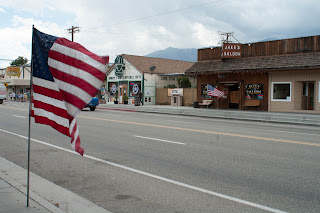 I liked Bishop - it has a human scale. I walked the whole length of Main Street and back in 30mins. The buildings are one or two stories, and unlike many American cities, Main Street appears to still be thriving. Tourism has a big impact here - hiking in the summer, skiing in the winter. I hear French, Dutch, German everywhere I go.

I spotted a little micro-brewery on my walks, so went back there later and had a flight of beers (6 quarter-pints, one of each beer they make). All were delicious - and quite strong in the American craft beer style. They washed down a squash and goats cheese pizza (see, I don't only eat burgers here). The night ended with a trip to the local independent cinema, then back to the Motel for more planning.

This little cafe came highly recommended on Yelp - and lucky it did, as I don't think I would ever have spotted it otherwise. A diner-style cafe with a great range of breakfasts - I had the Errol Flynn scramble with hash browns and it set me up nicely for the rest of the day. The burgers on the table opposite looked huge and delicious. I also note lots of options if you're a vegetarian. Simple, tasty, unpretentious.

This is why I want to move to Bishop - and why my waistline would never let me. This Dutch bakery has been here for ever, and they've had lots of practice making a vast selection of cakes and pastries. My only problem was that I only had two opportunities to eat here before I had to move on.

I'm a sucker for a micro-brewery, and as the food here was well regarded, I thought it would do well for dinner too! I was paralysed with choice, so I picked the 6 beer flight, then one more intriguing looking beer I saw on the board. I had a squash and feta pizza that was quite delicious too. Another reason I wish I lived in Bishop.