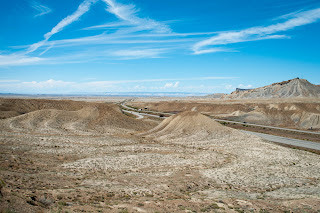 The drive out of Provo, back on US-6, had its moments. The railroad, river and road all followed the same path out of town. The gorges, canyons and valleys (what's the difference?) making for a dramatic drive back to the plains of Utah.

The landscape then reverted to the Martian vistas of the previous day - not even aromatic sagebrush to break up the view.

Yet, if the landscapes weren't too exciting, my fellow travellers made up for it. For a large part of the journey, I found myself accompanied by a group of bikers - at least 25 in front of me, the same number behind.

Each had the regulation beard, sunglasses and bandana, few had helmets, but most had slim, blond female pillion passengers. Most rode in the feet forward, hands high position beloved of bikers ever since Easy Rider. And there was me, in my dusty little Jeep Renegade, somehow in the middle of this. 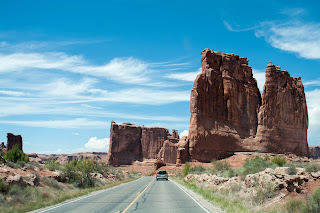 At some point in the endless desert, they all peeled off for an unknown destination, and I was alone again in the dusty, dirty landscape. Most of the journey east felt like I was driving through an open quarry, the combination of endless roadworks and dirty grey sand dunes.

Things brightened up when I reached one of America's great natural wonders, the Arches National Park.

For reasons I wish I understood (Wikipedia's description is technical and rather confusing), millions of years of erosion have created a landscape of  vast towers, columns and arches. The first viewpoint - named Park Avenue because of how the vast columns resemble skyscrapers - was breathtaking.

Every corner I turned presented me with the most incredible view. I took a hundred photos, but I'm sure none will capture the scale of this astonishing place. 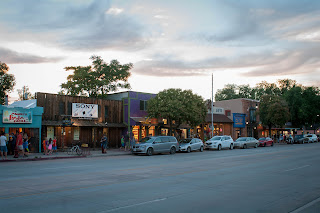 From there, it was into Moab. I'm still in Mormon Utah, but this town had a more cosmopolitan vibe. I wore the same outfit I wore in Provo - jeans and a white shirt - but this time felt over dressed. Shorts and a t-shirt with an alternative slogan would have been perfect.

The streets were buzzing with German, French and Dutch. Moab is the centre for off-roading, hiking, and - in the winter - skiiing.

I had a delicious lobster curry at a the 'Twisted Sistas' restaurant, and retired early, leaving Moab to party into the night.

They obviously eat later in cosmopolitan Moab - when I arrived at 7pm I was worried I'd be the only diner, and this restaurant might not live up to all the good reviews. But it definitely did - the lobster curry was fantastic, they had a good selection of local beers and by the time I left at 8pm the place was buzzing.